IT’S TIME TO START THE LATKES…….

by Sherry Wernicke
in On the Menu, Recipes 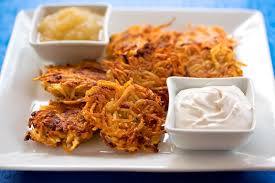 Latkes with sour cream and applesauce…

We make a big batch, because we also like having them on hand to warm all week; like at breakfast with a fried egg on top or after school topped with pasta sauce and cheese.  You get the idea.  These are my basic potato latkes, but you can also use sweet potatoes, zucchini, spaghetti squash, and more.  I really don’t follow any recipe except adding what I want.

If making basic traditional latkes with russet potatoes, I use 1 potato per person as a guide and  this is how I start:

HAVE A GREAT HOLIDAY!!!!

WHAT DO YOU ADD TO YOUR LATKES?