A REAL LIFE APPLICATION OF RoadID 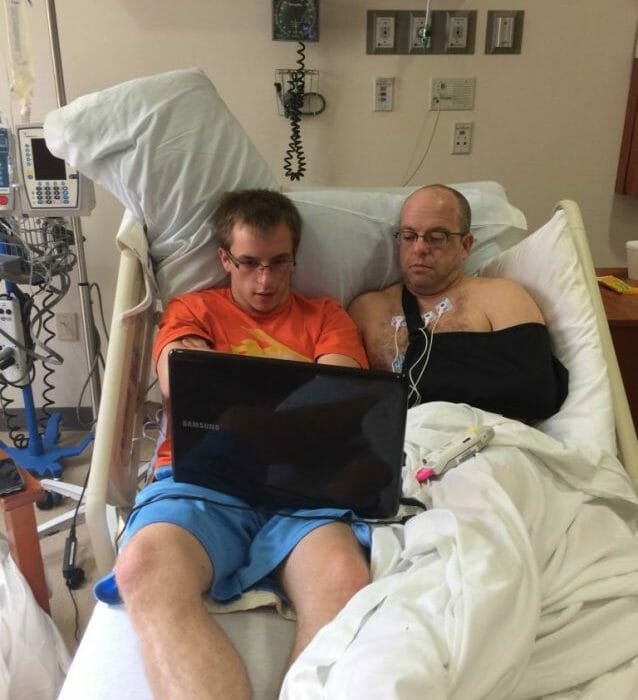 David and Sam soon after the accident.

This is certainly not a post we ever wanted to have to do, but circumstances arose over the weekend that we feel compelled to share with everyone.  As many of you are probably aware, Dana’s husband was riding his bike on Saturday and was hit by a car.  He did sustain 3 broken ribs, a fractured clavicle, broken finger (that they popped back in at the scene – big OW), and tons of road rash.  (Bike not severely injured for those who are wondering).

He is having surgery today and will be feeling crappy for a long time.  Dana wanted to get some information to everyone, so please read what she has to say and heed her advice.  This is NOT an ad for RoadID  and the eCrumb app at all.  Dana is just so thrilled at how well it worked and is adamant that people “get it and use it”.  Since she has been in contact with the company about the accident, they have offered our readers a 10% discount.  Just put in code TriWives10 at check out.  Read on…..

Saturday, May 31, started out as a normal day in our household.  The kids were off doing their thing, David was off for a bike ride, and I was doing more preparations for the move.  But, then I received this dreaded text.

The RoadID e-crumb in action…

I didn’t worry; 5 minutes could be a water bottle stop or pee break right?  Then, came the next and so thinking this warranted checking out, I called his cell, but no answer.  So, I picked up my keys and headed out.  Then the call; oh, that call.  “Hi.  This is Karen and I am with your husband.  He’s okay and is with the paramedics”.  Wow, that was fast.  An accident, 911 call, and paramedic arrival; all within two-5 minute RoadID e-Crumb messages.

Karen went on to tell me he was alert now (did you get the “now” reference, implying he wasn’t before) and they were taking him to 620 Round Rock Hospital.  Where in the world was that?  I googled the address and ended up in an empty parking lot and checked my phone again.  Another e-Crumb alert came in that he was moving and I followed it to the correct hospital.  It was the closest Level 1 or 2 trauma unit.  Who knew a simple band around his wrist and an app were so powerful?

When I arrived at the hospital, they had him back from some tests and settled in.  I was finally allowed back in the room to be with him.  David was a mess and repeating himself.  I was scared, but smiling, so not to worry him too much.  He still had his RoadID on and his phone with him and mine kept beeping; more alerts were coming in.  The hospital personnel asked what was going on with all the beeps and when I told them, they were all amazed.

The police officer came in to speak to David and had news about the guy who hit him;  a 3+ DWI offender, with an unregistered car; uninsured, suspended license; and an open cold beer, and a gun!  He was in jail.

What’s happening now?  David’s having surgery this morning to repair the fractured clavicle.  We will contact the DA and hope to keep this guy off the road.  And, as my trihubby said last night, “if nothing else, you have really good blog content”.  So happy to see he still has that sense of humor…..

So people, get a RoadID for you and all your loved ones and use the eCrumb app (of note – per RoadID, it’s coming out for android phones in the next month – only for iPhones currently).  Our friend, Tara, even has them for her kids.

Multiple uses for the RoadID.

And please, always stay to assist when you witness an accident.  David said having someone with him with their hand on him for comfort, made all the difference in the world.  I just have to add a BIG thank you to those who helped during the accident and who checked on David to make sure how he was doing.  No doubt there are kind, compassionate people out there.  Will keep you updated…..