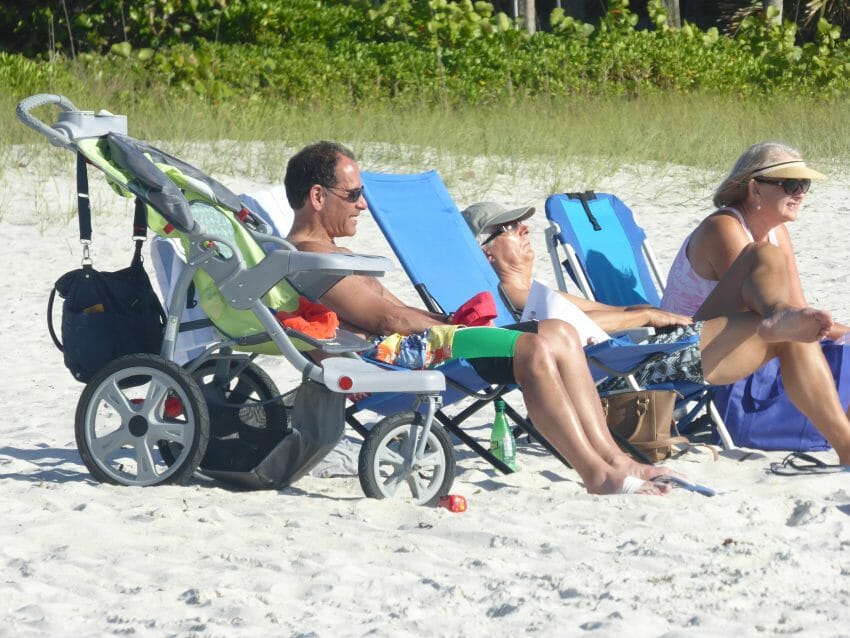 This is one type of travel that doesn’t happen to us often, but recently did. It’s going on a couples vacation when only one couple decides to bring a child.  It’s one thing when you both have kids along, because your situations are similar and it’s family travel and all that entails.

Both of you will most likely want to do similar activities. We’re assuming the kids are of similar ages here – eat at same times and places, and seek similar accommodations.  If you didn’t, you probably wouldn’t be traveling together in the first place.

But, when you find yourself in the situation where your friends bring their kid(s) along and you don’t, how is the vacation affected?  When it’s just adults on the vacation, you have certain expectations of what you’re going to do activity-wise. Perhaps you want to throw in some late night dinners and dancing. Bringing a child along can certainly be a vacation changer…

We recently had a 6-day beach vacation planned with friends, but rather last minute, their sitter cancelled.  The options were to either bring their 5-year-old son or cancel the trip.  Here’s what happened and what we learned when we proceeded as planned, but with a kid in tow.

This is first and foremost.  As I mentioned, we did know ahead of time, but not much, that their 5-year-old child would be joining us on the trip. We decided to forge ahead anyway.  There was little conversation about how this would affect the vacation. But, we found out it certainly did in terms of our activity schedule and where and when we ate.  So, our vacation expectations ended up being very different from reality.

If you were hoping for an adult vacation and you end up at a water park, this could certainly put a damper on your happiness.  If this makes a difference to you, it’s best to ask up front re their plans, babysitters, etc. You don’t want there to be any hard feelings during or after the vacation.

Dynamics will be very different depending on the ages of the children and if you’re sharing a house together or have rooms at a resort.  We actually shared a house and while there was plenty of room, with a small child present, we did get a few “shhhhh’s” while he napped/slept.  Luckily, we wake up early and work out, so mornings were not an issue.  I think if this were planned all along, I would opt for the resort/hotel room to have my total freedom.  This would be even more so if it were a baby.

This is probably where our vacation was affected the most as children need to eat at certain times and like certain foods.  Breakfast was never an issue, but lunches and dinner were another story.  When we ate at the beach for lunch, all was well, but we did end up at a few fast food type places when we were playing tourist that wouldn’t have been on my list.

Also, our assumption that we would have nice dinners out around 7:30 or 8pm with a bottle of wine did not happen very often.  Instead, if we wanted to be with our friends, we had to either eat early or fix our dinners in.  Luckily, their son does fine in restaurants, so we were able to go to some nice places and they were able to get a babysitter for several nights.  This just wasn’t the meal plan I had in mind.  And, there was no after dinner music and dancing as unless he goes along as part of a group, this is not my husband’s thing.

Probably the fact that this was a beach vacation helped to minimize any issues with differences in activity choices.  We did part ways on a few days while they took their son to a small amusement park and a zoo, which we had no interest in.  But, that was actually okay, as you don’t want or need to spend every waking moment together.  Besides the beach, we did a few touristy things together, but it wasn’t quite the same as just being couples.  And, not that we swear much, but you do have to mind your mouth when you’re around a 5-year-old!

Here’s what I would consider if you’re thinking about taking a vacation with a family who’s bringing kid(s):

Differences in who tags along on the trip does not mean it can’t still be a great vacation with your friends.  You both just have to realize what type of vacation it’s going to be from the get go and be willing to make a few compromises during the trip.

DO YOU EVER TRAVEL WITH FRIENDS WITH KIDS & LEAVE YOURS AT HOME?

how to travel with other couplesvacationsvacations with kids
Leave a comment