HE’S GOING TO DO THIS ANYWAY – JODI’S STORY 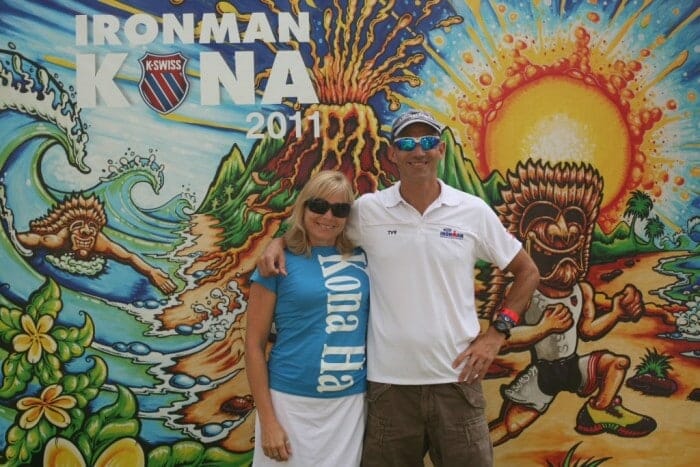 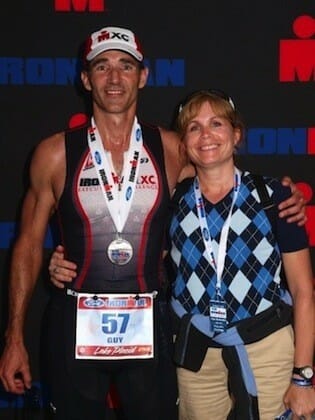 Wow.  My story.  I’m not sure how to do this.  It’s always been about “My Husband’s Story” in getting into Ironman…. not mine.  But it is true, I guess, that it is my story too, because it has affected my life – OUR life together in profound ways.  I just never thought about it being my story to tell.  So, here goes!

I was born in a small town in PA….just kidding!  (WeLL, not kidding, but that’s not where the story should start….).

Guy and I were always active; he more athletic and competitive than I, but both loving the outdoors and sports.  We took active vacations with our kids (hiking, rafting, biking, and kayaking) and spent family outings together going to watch and cheer “dad” in his current sport passion of the moment.  It progressed from running, to serious bike racing, and finally sprint triathlons. With each step, the training time got longer as the kids grew bigger, and finally they started participating sometimes too, which was fun.  I was always happy and satisfied to be on the sidelines watching and cheering them to the finish line; happy we were all together, healthy, and enjoying outdoor activities.

Empty nest came with a sense of time and travel freedom, so Guy indulged his long-time dream of completing an Ironman.  He self-trained and entered Ironman Lake Placid with a CEO Challenge program.  (Incidentally, that’s where we met Sherry and Carl)!  I was totally supportive of this exciting endeavor – even though it was our 25th anniversary celebration – but was totally unprepared for what it would mean for the future.

It was the worst weather ever – 12 hours of unrelenting, pouring rain with temperatures in the 60’s.  I wore a sundress – yes a sundress! – under my frogtogs and Wal-Mart clear plastic poncho – and still got soaked through. The race had a totally unexpected impact on me.  From watching the kayaks funnel in the last swimmer to make the time cut-off with the crowd screaming encouragement, to ringing my bell as Guy came around into transition after the bike,  to standing calf deep in rain rushing down the street to cheer on the other CEO competitors and watching anxiously for my man, overwhelming emotions ruled the day.  I was taught the “sport of spectating” and I was hooked.  Guy finished the race and was near collapsing in my arms as I was elatedly asking him, “Are you gonna do another one?”  His answer…. “Don’t ask me that now.”

So was it him or me?  I guess we both chose this new life in a way.  While I only run and not too competitively, I am competitive for him to do well, because that’s what makes him happy.  To spend more time together, I plug myself into his training.  I help him with his swim timing send offs, provide nutrition and support during long runs, and drive “sag wagon” for feeds and a ride home on 112 mile end-point rides.  As a wise wife told me during that first Lake Placid race, “I support and help him in training in whatever I can. Because he is going to do this anyhow, it is much more fun to watch (and live with) him when he is winning and doing well than when he isn’t.”  I’ve never forgotten that advice – and it has made a world of difference in adapting, enjoying, and yes, sometimes surviving this triathlon life.

life with a triathletetriathletestriwidowtriwife
7 Comments