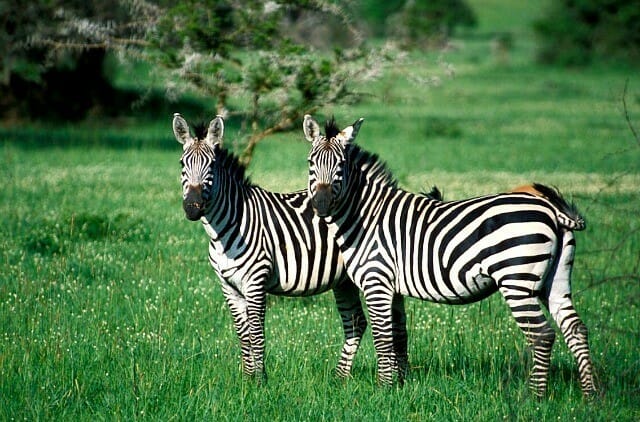 Common sense tells me that eco tourism is a good thing.  Right?  That’s certainly what I’ve always believed.  But, when I talked with people about their eco vacations and what they did and witnessed first hand the behaviors of people and tour companies, it really started me thinking.

What did I discover?  Not only that I have some pet peeves about bringing tourists into these delicate ecosystems, but that I have 2 questions:  Is eco tourism actually doing more harm than good?  And…Is there a better way to draw attention to issues, such as the effects of climate change on glaziers, the dwindling numbers of penguins and polar bears, and to poaching of wildlife in Africa? 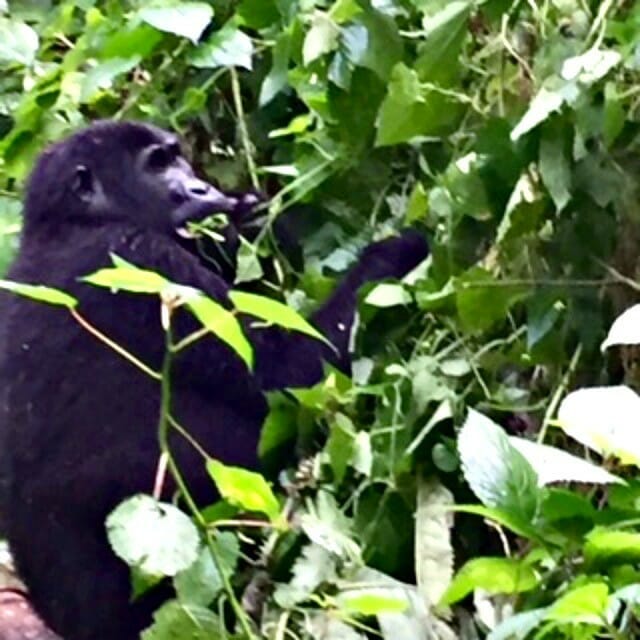 I hope my sharing starts you thinking about the issue and even opens up a dialogue with others.  That is certainly my intent.

Now, I totally get the small ships heading up with passengers who engage in research.  Not the fake kind of research, but the kind that is making a true difference.  The groups like National Geographic who invest the dollars people spend with them back into their research.  They have taken a pledge to do no harm and they don’t transport their passengers to a colony of penguins and say, “Enjoy.  You have an hour”.  They have naturalists and penguin ecologists that go with you to make sure you do not touch or disturb things you aren’t supposed to and don’t leave garbage behind. 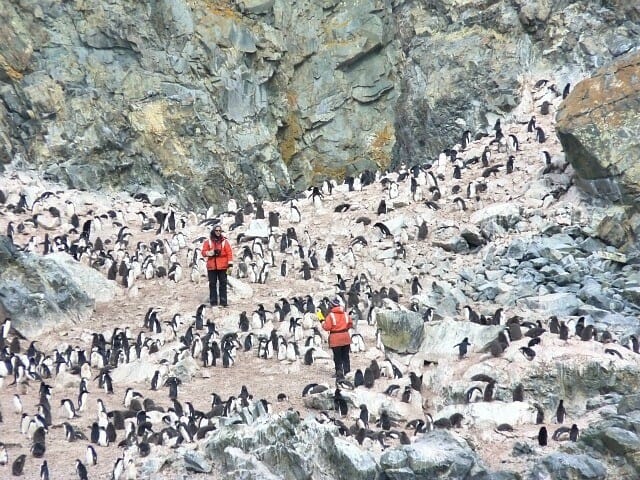 My editor, Sherry, actually went to the Antarctic with Lindblad for the very reasons I am talking about.  Instead of being dumped on an iceberg to walk around to destroy the area and disrupt the penguins, they were educated on the area and told specifically what NOT to do and as a result, their experience did no harm.

I really think the ecosystem can be better preserved if less ships sail to the area.  Fortunately, steps have been taken to control travel to the Antarctic.  Starting in January of 2017, a new “polar code” adopted by the International Maritime Organization goes into effect that places restrictions on travel to this continent, including the size of ships (no more than 500 passengers) and behavior on shore (no food and no more than 100 people on land at any one time).

But, one of my biggest pet peeves of all has to be this…For goodness sake, why in the world are we cutting up icebergs to serve vodka and other drinks on them?  I see these acts as irresponsible and disgusting.  Let’s think about sustainable travel for it’s true meaning and not “destroy the world” travel.  And, yes, one person can make a difference and you can do this with your wallet. Did you know the Dead Sea is disappearing?  I am sick from “travel” writers saying, “go to Israel and experience the Dead Sea before it’s gone” and post pictures of themselves covered in mud.  That’s a tourist to me doing harm.  Stop it!  I don’t care if the tour company says it’s safe; they want their money and their tips.

Yes, the Dead Sea is disappearing mainly due to other issues, but the truth is each person that goes in and takes from it, no matter how much, is doing harm and no one can convince me of anything different.  Really, think about it.  You and thousands of others enter every year and you can’t tell me that when you jump in and cover yourself with mud, you are not taking from that environment.  And, I have to ask what would happen if everyone just stayed out for one year?

There are so many different types I don’t even know where to begin.  I could go on and rant about animals in captivity that we jump in the tank with, such as swimming with the dolphins.  We now know from years of studying animal behavior that they are thinking, feeling, intelligent beings with the ability to suffer greatly.

As a past COO of a Marine Rescue Hospital, you can’t imagine how many stingrays are replaced in a year just for you to swim with.  Do you seriously think they love it?  Just think about it a minute.  They were wild and captured for your entertainment or bred in captivity.  But, now with all the people paying to swim with and feed them, they can’t survive on their own even though they are “wild”. 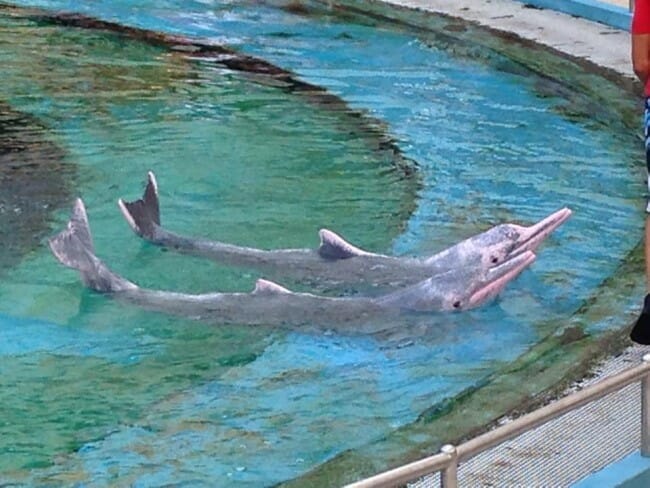 Then, there are all those animals that we invade their space even though they are protected and we are not to approach.  Yet tour boats drop people off to “swim with the manatee”.  Tour companies tell us to go to certain beaches to be with the sea lions.  But, none of these animals are in captivity so they get no care.  No vet checks them if they are injured when we invade their area.  Just touching them can introduce foreign bacteria into their environment that they are unable to fight off, leading to infections and death.

People chase, people touch, and people harm.  These wonderful creatures are on the brink of disappearing mainly due to irresponsible boaters, toxins from the chemicals from our lawns that run off and destroy their homes, and other environmental concerns we have caused.  Why do we now need to jump in their homes?

I will admit I do love to snorkel, but I am a do no harm snorkeler.  I never put my feet down and I swim away, not towards, sea turtles eating or a school or fish.  I have no desire to jump into a school of rays who have gathered by human collection or by learning where the easy food is.  They may say they are wild and love it, but the truth is they have been fed and trained to be there.  Do you really think that all the chemicals from our suntan lotion are innocuous to them?  Those chemicals do harm.  You may think, oh, it’s just me, but it’s not just you; it’s person after  person and cruise ship after cruise ship. 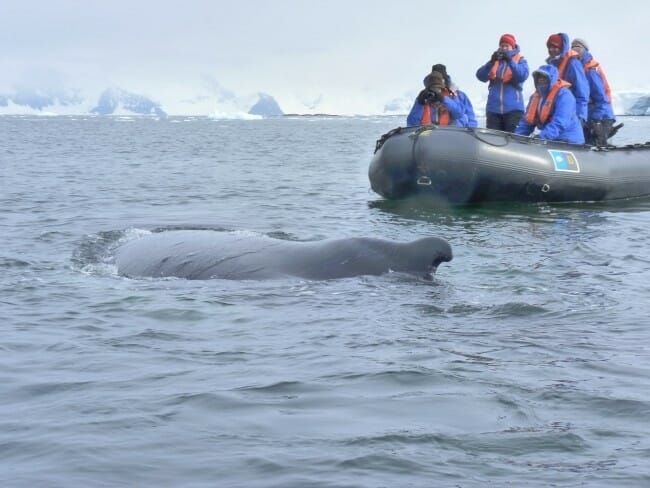 And, then there are those poor whales chased by the tourist boats.  I love to whale watch, but I would only go with companies that are proven stewards.  Our boats always have naturalists who are recording for national and international organizations.  I can’t stand the boat with the captain on a loud speaker or the boats working together to push whales to shore areas to “perform”.  They are not happily performing for you.  They are being stressed and want out of the situation.

Then there are safaris, mainly African safaris.  I’m really torn here, but lean toward them as having a positive impact.  But, only when they are on reserves and not where tourists can have physical contact with the animals.  There is so much poaching going on in these countries that one of the only ways to stop it is to offer the residents alternative means of income.  By hiring the locals as guides and rangers and by putting tourist dollars into the economy, it may be possible to save some from extinction. 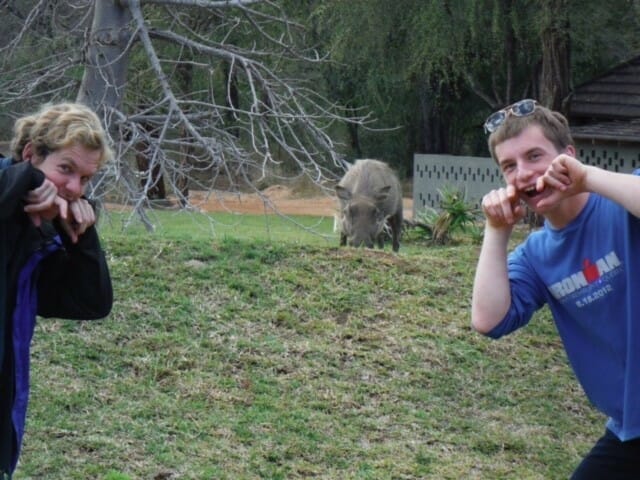 So, you may be asking if I still believe we should travel to these destinations and others.  The answer is yes, but doing it in a better way.  Let’s look at Butane’s model and start saving the world we live in for future generations.  They limit the number of tourists and travelers that enter their country each year and I think they are on to something.

I fully understand these are my questions,  thoughts, and opinions and you do not have to agree with me at all.  I only ask that you please respect how I feel and think about the issues I am bringing up the next time you book a swim with the dolphins and ask yourself Is Eco Tourism Doing Good or Causing Harm?