THE CHARACTER OF A TRIATHLETE 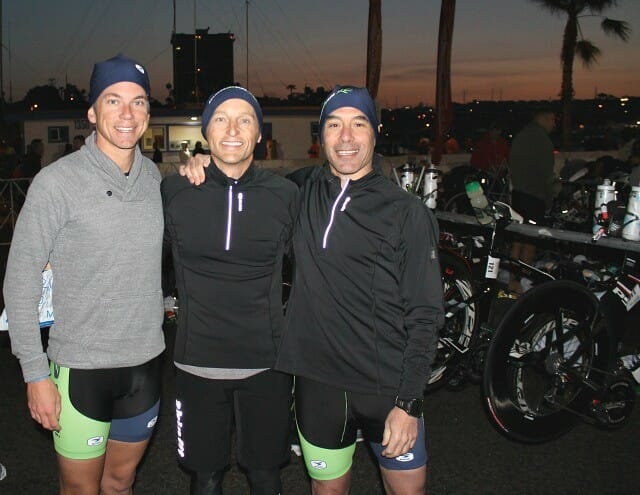 Okay, I admit it…I often either make fun of or complain about my experiences living with a triathlete. Yes, it’s true. And I know I’m not the only one. You know you do it, too! But, I had an experience at a triathlon last year that really brought home for me what an amazing person my triathlete is and it started me thinking about the character of a triathlete; that inner something that makes them do what they do and what they do, so unique and amazing.

I have always been astonished at the discipline my husband exhibits, what he’s accomplished at his age (sorry honey), and what he’s put his body through since he started doing triathlons. And, I’m the first to admit I’ve been remiss at the number of times I’ve told him this and that I’m proud of him, REALLY proud of him, mostly because the negative aspects of life with a triathlete sometime overwhelm me.

Even after all these years and being a die-hard trisupporter, I still don’t get it AND know I could never do it. To get up at 4 in the morning to ride a bike in the basement; watching a computer monitor when it’s 10 degrees and dark outside; aiming for some goal that’s months away and then gets dashed because of an injury; but you still get up to do the same thing even when there’s now no goal dangling in front of you – whew – either defines a lunatic or the heart of someone very special.

So, I started thinking…What makes him do what he does? Lord knows I don’t have in it me and I don’t know many people that do. Does this carry over into other aspects of his life? Is that same dedication evident in his relationship with me; in his interactions with his family and friends; in his job; in other hobbies? But, I also thought…Is it just my husband or are there similar traits in every triathlete?

Which brings me to why it’s taken me so long to write this post if I had the epiphany last year. Knowing so many other triathletes and triwives/partners, I realized I had a built in study group. So, I took the time to look at the lives of these other triathletes – no names will be divulged – to determine if there are common characteristics of a triathlete and guess what? Yes, there are…Quite a few, actually.

Some good, some not so good, some good, but that don’t always carry through to home life, some obvious, and some not so obvious. But, after we compiled the list, we realized it was much too long to read in one sitting, so have made it into a series:

THE ALL AROUND GOOD

This was actually one of the traits that made me fall in love with my husband. I can still see him standing at the door on our first date, dressed in his t-shirt, rolled-up sleeves blue linen jacket, and baggy pants. He was puffed up, looking cool and confident. This confidence has spilled over into other aspects of his life over the years, so why not triathlon. In order to practice a sport that has 3 disciplines, there has to be a belief that one is capable of being proficient at said disciplines and that’s confidence. Plus, they believe that either they are a winner or at least have the ability to win.

Most triathletes seem quite driven in all aspects of their lives. From being a success at work to raising a family to the effort they put into extracurricular activities, there’s a motivation to do well. What brings this trait home as triathletes is an innate desire to improve upon that last race – hence the striving for a PR – and will do what it takes to reach that goal. This sport definitely motivates them to push their body (and us) to new limits.

They are very unwavering in their love of this sport. Even if they have 2 flat tires or are throwing up on the run, they push forward with the task at hand. I’ve seen so many triathletes walk the run leg of a triathlon just to cross the finish line, mine included. That’s walking 26.2 miles!!

And, think of the spirit of all those you’ve seen cross the finish line close to midnight just to hear Mike Reilly say “you are an Ironman” or those who have missed the deadline, but still persevere to the finish line. Wow! Just being able to complete a half or full Ironman distance race is insane to me, so the inward strength to withstand the stresses placed on the body and still do their best is just astounding!

What gives someone the strength to fall, wipe themselves off, and get back on the horse? Resilience does and triathletes have this in spades. This is a great ability to bounce back despite obstacles you face along the way. A triathlete’s resilience shines when they’re fighting back from an injury and Dana and I have certainly experienced this with our husbands. They go through therapy and when allowed, continue to train at all hours just to get back on that bike saddle.

Also, when my husband has had to DNF a race, I certainly have felt a lot worse than he did. I’ve gone through stages of loss, whereas he has shaken it off and is already thinking about the next race. He takes this all in stride.

Have you ever seen an experienced triathlete sharing his knowledge with a newbie or trying to convince someone to do their first triathlon and even going to their first race ? I have many times. Maybe it’s because misery loves company, but I think it’s because they truly want other people to experience the high they get from triathlons. They also make great mentors at work and coaches for little league and soccer games.

While they want to win, when they notice the suffering of their fellow triathletes, they will step up to help and not run them over, so to speak. I’ve personally witnessed these acts of self-sacrifice by multiple triathletes, such as offering to walk with a fellow triathlete in pain to keep them going to the finish line to placing a cool towel on their neck. They truly know each other’s pain. This trait is one that keeps me in love with my triathlete and this sport.

The best example of a triathlete exhibiting empathy was at St. Croix 70.3 quite a few years ago. Craig Alexander crashed his bike and had to drop out of the race. Well, he didn’t leave and mope about his bad fortune. He actually went up to a friend of ours who had a similar situation and asked him how he was, how his bike was, and essentially told him life was good and he’d live to race another day.

Triathletes seem to be forever in pursuit of personal physical improvement. Whether that means learning new swim techniques, riding in the basement with a heater on to get used to exercising in hot/humid weather, or hiring a nutritionist. They are constantly striving to be a better “me” or the best they can be. Most triathletes also reach a point when they plateau in the sport if they’re training on their own and are able to recognize when perhaps they need a coach or some help with a nutrition plan to keep progressing.

Gritty people believe everything will be alright in the end and if it’s not, it is not the end. I think that sums up the character of a triathlete quite well…enough said…

So, did we get any wrong? We’d love to hear what you think…

NEXT UP: Good, But…Home Takes a Back Seat