by Sherry Wernicke
in Home, Ironman, Life with a Triathlete 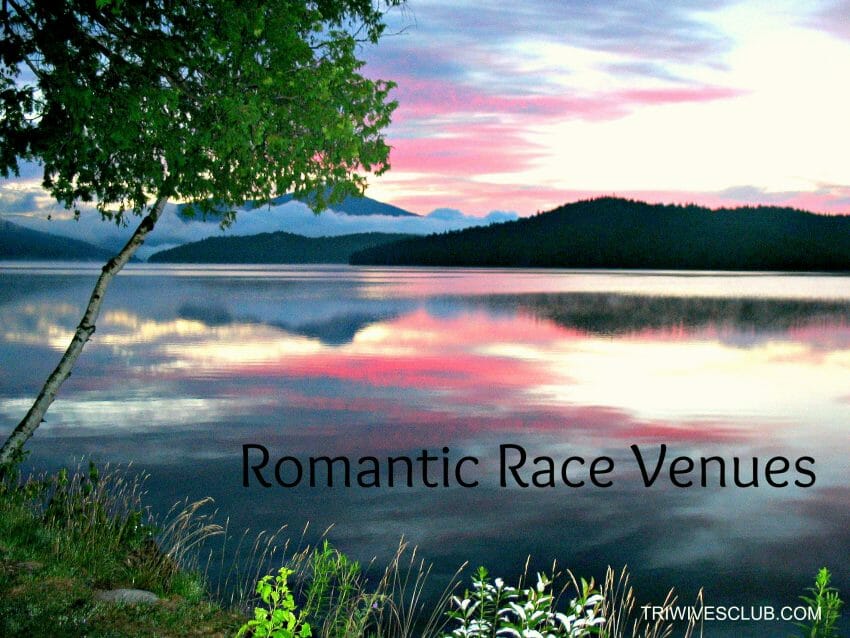 Aaaah, romance….. The TriWives love a little romance in their lives. Really, who doesn’t? But can triathlons and romance go hand in hand? We thought so and remember, romance isn’t just about the physical place; it’s also a state of mind. So, with Valentine’s Day quickly approaching, we decided to get into the spirit and write about the MOST ROMANTIC TRIATHLON RACE SITES that we have been to. We each picked our favorite, leaving out the obvious, Hawaii. And, the reasons why may surprise you; they did us. Here’s what we came up with:

SHERRY: My most romantic race? After some thought, I chose Ironman Austria in Klagenfurt, a resort town in southwest Austria.

A view of Lake Worthersee outside of Klagenfurt, Austria.

I had not been to Austria in many years, so I was very excited when Carl informed me he was thinking about doing this race. I had not heard of Klagenfurt, but seriously, how bad could it be? Plus, I had not been to Vienna, so we decided to add this on to the end of the race for a mini vacation. (Can’t stress enough how important extending the race for a few days vacation is if you can afford the time).

The scenery surrounding Klagenfurt is simply stunning, especially the lake outside the city center, called Lake Worthersee, where the swim takes place. The water is so pristine you can literally drink from it. As we drove the course, I kept yelling, “stop” so I could take another picture. I have never seen such a gorgeous bike course in my life.

But, despite the scenery, that is not why I chose Klagenfurt as my most romantic race venue. I chose it because it’s the only race we have been to where WE DID NOT KNOW A SOLE. We were totally left to ourselves for good or bad and for a solid week at that. There was no one to entertain us or to have dinner with; it was just us and that ended up being just fine…. We walked the town together and had intimate dinners. I helped him into his wetsuit, drove the bike and run courses with him, and helped pack transition bags; not activities I often do.

The town itself is quite picturesque actually with the very old European feel. There are many plazas and cobblestone streets, which just exudes the air of romance. You may ask what’s so unusual as don’t we vacation alone? Well, yes, but there is a big difference between being alone on vacation and during a race, when there is tension and stress in the air that can strain any relationship. As a trisupporter, you often look for someplace to escape to and appreciate apart time. Not this time.

The race itself ended up being a tough one for my husband. Although sometimes a bit difficult venue to maneuver for a supporter – I mean I took a bus ride up to a quaint Austrian village just to see him zoom by me on the bike – well, okay, and to have a stein of beer – you get to see your athlete quite a bit. Around mile 8 on the run, we again found each other.

He was in such obvious pain and ready to call it a day, walking at this point – unresolved plantar fasciitis. I so just wanted to hug him and my heart was so sad. While I told him it was okay to stop, I knew that would be so disappointing for him. So, I chose to encourage him to keep going as long as he could and he did. He finished the race as you can see below and look at that smile. I’m smiling just looking at it and remembering. Now, that’s romance…..

Carl at the finish of Ironman Austria.

JODI: My most romantic race? That’s easy . . . it was “My First”. And, my first was Ironman Lake Placid.

One down, many more to go…Ironman Lake Placid finisher.

Like a first love, Lake Placid was where I first experienced the thrill, the excitement, the anticipation, and the desire for more. I get giddy just remembering! There is something so intimate about totally focusing on and supporting someone you love reaching for and achieving their goal. Catching my husband as he crossed the finish line and embracing him in celebration of achieving his longtime dream is a sweet, sweet memory.

What matters is that we were venturing out together, discovering a new passion, and embarking on a new life. . . kind of like a honeymoon. .. an Ironman honeymoon!

I guess my point to all this is not to convince you that Lake Placid is the most romantic of all races, although for us it has been a favorite place. My point is – don’t be surprised that your first big race just might hold a special place in your heart and memories like me . . . like a First Love…..

DANA: My most romantic race? Oh, without a doubt, Mallorca and not for the obvious reason of island bliss. The single most important reason why Mallorca is my choice is TADA – the time difference! Really, it is. I mean think about it. If your triathlete is anything like mine, he is connected 24/7 to the office. But, that 7 hour time difference rocks and it’s in the right direction.

We had glorious morning hours together before the office even opened and by right after dinner, my trihubby was ready to retire to bed. It may be early afternoon at the office, but his beauty rest pre-race rules…

They look soon happy on the beach at Ironman Mallorca.

The second most important reason why I chose Mallorca, or for that reason any race with a greater than 5 hour time difference, is it means an extended vacation to adjust for the time zone; and that is golden!

Ah, but the romance. We tend to travel to races with Ironman XC for the simple ease of it and extend our trip on either end for some down time. For the most part, the island is very quiet the week before the race. The hotel was pretty empty and that was wonderful. And, except for the others in our group, the part of the hotel we were in was empty. That is a priority for us; small hotels are the best. The rest of the romance came easy – ocean front suite, wonderful food, walking the old village of Palma, and just driving around and finding places to stop and take in the scenery.

There is something special about going someplace for the first time and just winging it. My trihubby would say, “so why are we staying longer? What are we going to do?” And my answer was always, “whatever” and that’s exactly what we did; a lot of whatever. We found ourselves spending hours just sitting on cliffs, walking, exploring a cavern or two, and just being together. Not connected to the office, not near the race, not worrying about a thing. Aaaaaaah……

Mallorca is big enough to make you feel like you have space and you can spend hours not seeing a sole, but small enough to give you a little spice and nightlife if you want it. And believe me, it was easy to take advantage of both.

A view of Mallorca.

The race was special as well. We were there for the inaugural race, so the energy was fantastic and our group was couples from all over the world. We were a small bunch, which made it very intimate. The guys were taken care of race day, as were we. While the guys went off to prep and get ready to swim, we enjoyed a wonderful breakfast on the beach together, comparing notes and sharing spots we must visit.

I much prefer a 70.3 for a romantic get away, as there is less stress and he is done by lunch and we have the day to enjoy. The only stressful moment came when dear trihubby had his first and only tri melt down. It was the first and last time I was told to know what was going on in the race. See, he finished 40 seconds behind Guy and beating Guy (Jodi’s Guy) is a big deal…

My trihubby actually had a quote that made the rest of the trip even more romantic, because he spent extra time kissing up to me – “If you would have been paying more attention, you could have told me I was only 40 seconds behind Guy and I could have kicked it up”. Not the smartest thing to say to your trisupporter…..

Who is he pointing at???

We have talked about going back, but realized that we found it so romantic because of the unknown and being able to just “be”. A repeat visit might lead us back to being comfortable and settle for what we know. We are in search of that next race to explore and where we’ll find the romance…..

HAVE YOU FOUND ROMANCE AT A RACE?