HOW TO HANDLE ALL THE TOGETHERNESS IN NON-TRIATHLON GETAWAYS 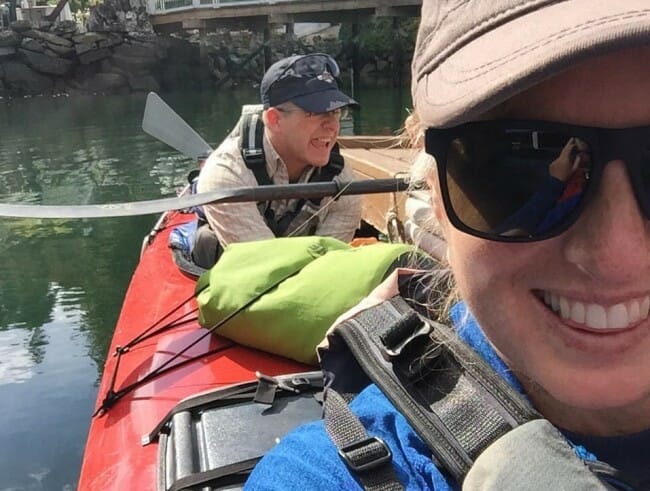 In the space of a month, David and I have had two non-triathlon getaways. Since it had been years when absolutely no training would be involved and all gear would be left at home, I wasn’t quite sure how we would handle this new found time together. But, we did and survived totally unscathed and argument free. Want to know our secret?

The unspoken expectation in each of our heads was that we would spend the whole weekend together, right? Well, not in my head, but I came to find out it was the expectation in my hubby’s head. It turns out he had been thinking about this for a while and was in search of something we could do together.

Truth is, we do a lot together, now that his nearly 10 years of commuting has ended and especially after moving to Omaha. Just being together every night and being empty nesters has been more together than we’ve ever had. But still, his expectations were that we would find some activity to do as a couple while away.

We discussed tandem bikes, but nixed that idea when our daughter said, “Please don’t. That’s weird”. We also talked about a double kayak and camping; granted my style of camping, not his – . But, it was still just talk. So, instead, we planned the locations and places to stay for our getaways, Boulder and Seattle, and decided to leave the rest up to our whims, the weather, and what the locals recommended we not miss!

The drive to Boulder was great. 8 hours flew by. It was our first “roadtrip” or being in the car for more than 3-4 hours. We had a great dinner in a cute little town at the foothills of the Sand Hills. It was so cool. I went to the restroom and when I got back, David had already ordered us dinner and a drink. We shared the famous Prime Rib Dinner at Ole’s Big Game Steak House. Yum. We ended up spending the night in Denver since we drove straight thru and headed off to Boulder the next morning.

After we arrived at A-Lodge, we explored the property and went for a walk down Boulder Creek and that’s when it happened. I suggested we head back and let David grab his fly rod and come back to go fishing. Honestly, I was thinking I would curl up in the chair by the creek and read my book while he fished. But, David said no.

It had been years since he cast his rod into water like this, so why wouldn’t he want to now? He loves fly fishing. And, what about my book? We walked on in silence, but I could see he had something on his mind; he just wasn’t telling me. So, I asked why and this is what I got…

Since I am not going to be training for Ironman distance races for a while, I thought we should do more together. That’s why I wanted to get a tandem bike. I wanted to find things we could do together.

Well, while that is sweet and all, it was not my expectation. Am I a terrible wife? Truth is, I like my alone time when we are away. It is great being together, but not every minute and every activity needs to be together. Even with his training backing down a little and us traveling more together, this in no way means we need to be joined at the hip on a getaway. I like to go for short runs, he likes to go for long runs. I LIKE to fly fish, he LOVES to fly fish. So, there is some balance.

The walk down Boulder Creek was one of those moments that helped shaped this phase of our life together. What I learned was that while his expectation of us doing everything together was very sweet, it was not his real expectation. He just felt guilty having more time and not spending every second with me. And, honestly, my expectation was that sometimes when we are away together, we would not be together. It took us that great hike to figure it out.

At the end of the day, he grabbed his rod, had no guilt, and spent a couple of hours of nice alone time fly fishing. I fished a bit, too, over the weekend, but for those couple of hours, I sat next to the creek and caught up on my reading.

A few weeks later we spent 10 days in the Pacific NorthWest. But this time, not only did we chat about our expectations, we made sure that David was able to fish alone on the river one night. Granted, that included a stop at the Orvis store and a purchase of a new rod, but he “needed” it. Oh, the memories of triathlon gear “needs”. Me, well, I had a wonderful walk on the 2 miles of property the owners had on the Yakima River and then a nice glass of a local, organic Proseco. The next day, we spent 9 hours fly fishing together. It was wonderful.

It is so positive for our relationship that we got this figured out. A great lesson was also reinforced. Don’t forget to communicate and clarify expectations! What you assume they are thinking, they probably aren’t thinking at all…